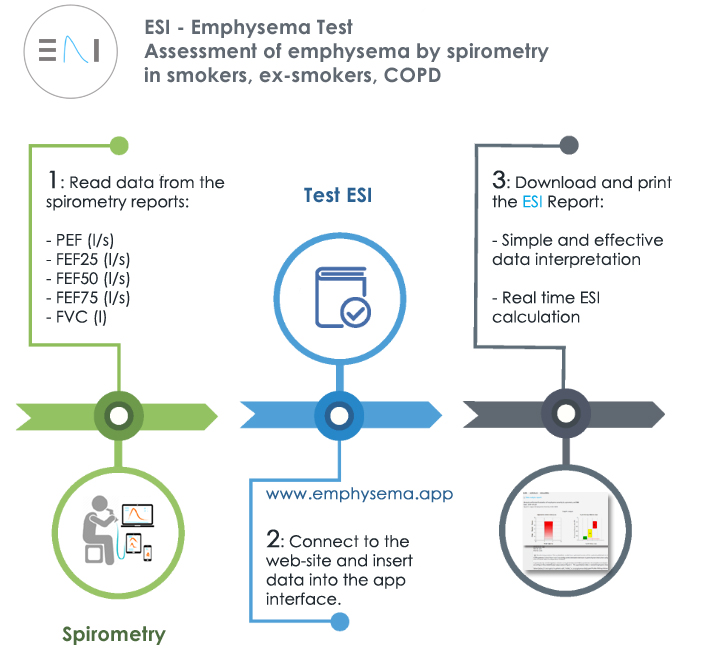 ESI (Emphysema Severity Index): Test for the assessment of emphysema in smokers, ex smokers and patients with COPD

The ESI-test is performed calculating a quantitative score (0-10) reflecting the severity of emphysema. The calculator is derived by a biomechanic mathematical model developed after 10 years of research  and experiments.

ESI has been validated in a large population of smokers, ex smokers and subjects with COPD.

ESI is now available for:

The analysis is based uniquely on data derived by standard spirometry without any standardization or normalization (i.e. % pred. or LLN, z-scores, etc…, DLco is not requested.)

Emphysema in smokers and COPD

According to WHO (World Health Organization): “Chronic Obstructive Pulmonary Disease (COPD) is not one single disease but an umbrella term used to describe chronic lung diseases that cause airflow obstruction.

The more familiar terms ‘chronic bronchitis‘ and ‘emphysema‘ are no longer used, but are now included within the COPD diagnosis.” According to the recent estimates, currently 64 million people have COPD and 3 million people died of COPD. WHO predicts that COPD will become the third leading cause of death worldwide by 2030.

Chronic obstructive pulmonary disease (COPD) is a complex condition with a wide spectrum of clinical presentations and pathological features unified under the spirometric definition of airflow obstruction. Airway narrowing and parenchymal destruction are recognized as the mechanisms responsible for airflow obstruction in COPD, but they cannot be distinguished by standard spirometry indexes such as FEV1 (%pred) or FEV1/FVC.

emphysema . app is the access point to the ESI digital platform. The ESI test for the assessment of emphysema is directly accessible by PC or Mac, laptops, smartphones or tablets via standard browsers.

Batch analysis tool is available for the calculation of ESI in large datasets and to perform multiple tests.

To perform the ESI – test is required a reduced set of flow-volume data acquired during standard spirometry. The required data are usually available in the output reports provided by common spirometers. The output results are provided to the user directly through the web based interface and a standard report can be saved or printed on local client devices.

Custom test output reports or data integration / interoperability with other systems or medical equipment is available on request for research projects.

Please contact us to calculate ESI or to integrate ESI in your projects:

The advanced clinical experimentation of the ESI theory was performed using dedicated math software in cooperation with the University of Florence, Italy, on a dataset of two hundred consecutive COPD patients who underwent High Resolution Computed Tomography CT scan and spirometry.

The current version of the ESI-test calculator is based on a novel real-time implementation of the theoretical ESI algorithm. This software was especially designed for clinical practice, pharmacologic trials, medical education and for the evaluation of emphysema whenever spirometry is the only available examination.

Recently, the performances achieved by the current real-time ESI test software have been studied on a large international database of smokers, ex smokers, COPD patients and the results obtained during the experimentation are very interesting.

For info and details about validation of the ESI method for the assessment of emphysema severity in a large population of smokers, ex-smokers and subjects with COPD please read the following paper (Respiratory Research, 2020):

The server-side (real time) software developed for ESI calculation is now validated. The ESI methodology was implemented to provide a simple and effective tool for the assessment of emphysema severity in smokers, ex-smokers patients with COPD. The web-based application available here at www.emphysema.app was used to calculate the ESI (Emphysema Severity Index) in a population …

END_OF_DOCUMENT_TOKEN_TO_BE_REPLACED 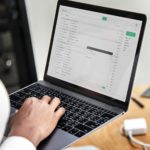 For info and details about ESI (test for the assessment of emphysema), ESI calculation, research partnerships, clinical trials, batch analysis of large datasets, please contact us: